We've shared some of the favourite memories of the greatest Yamaha riders to celebrate Yamaha's 65th Anniversary and the marque's rich racing heritage, but what of the future? Our final My Greatest Yamaha Memory comes courtesy of Freddie Bartlett, the 11-year-old winner of the 2019 YZ65 bLU cRU FIM Europe Cup, and one of Yamaha's new generation of racers.

The name Freddie Bartlett may not be a household name just yet, but the youngster has already impressed with his astonishing skills aboard his YZ65 and YZ85 dirt bikes. Based in Sweden, the British born youngster got his big break when he was selected by Yamaha Scandinavia to attend the 2019 YZ65 bLU cRU FIM Europe Cup Superfinale, which took place at the Monster Energy Motocross of Nations in Assen, The Netherlands. It was his performance at the Superfinale that saw Bartlett secure his place on the bLU cRU Masterclass, with the youngster finishing second overall in extremely wet and treacherous conditions.

At the bLU cRU Masterclass, which took place in Lleida, Spain, in November 2019, Bartlett, alongside four of his YZ65 racing counterparts, received coaching from Monster Energy Yamaha Factory MXGP riders Gautier Paulin and Jeremy Seewer. On the dry Spanish dirt, Bartlett was equally as impressive as he was in the torrential rain in Assen, and was selected as the first-ever YZ65 bLU cRU FIM Europe Cup winner.

As the winner of the YZ65 bLU cRU FIM Europe Cup, Bartlett has received support from Yamaha Motor Europe for his 2020 season. Initially, the speedy Brit was going to race his YZ65 for another season, but due to the delay in racing caused by the COVID-19 pandemic and after the recently announced cancellation of the EMX65 Championship, he has decided to move up to the bigger bike, the YZ85.

Despite his tender age and small stature, Bartlett has quickly adapted to his YZ85 and is already developing a strong following on Social Media thanks to his flamboyant style and incredible ability to put the bike where he wants it. 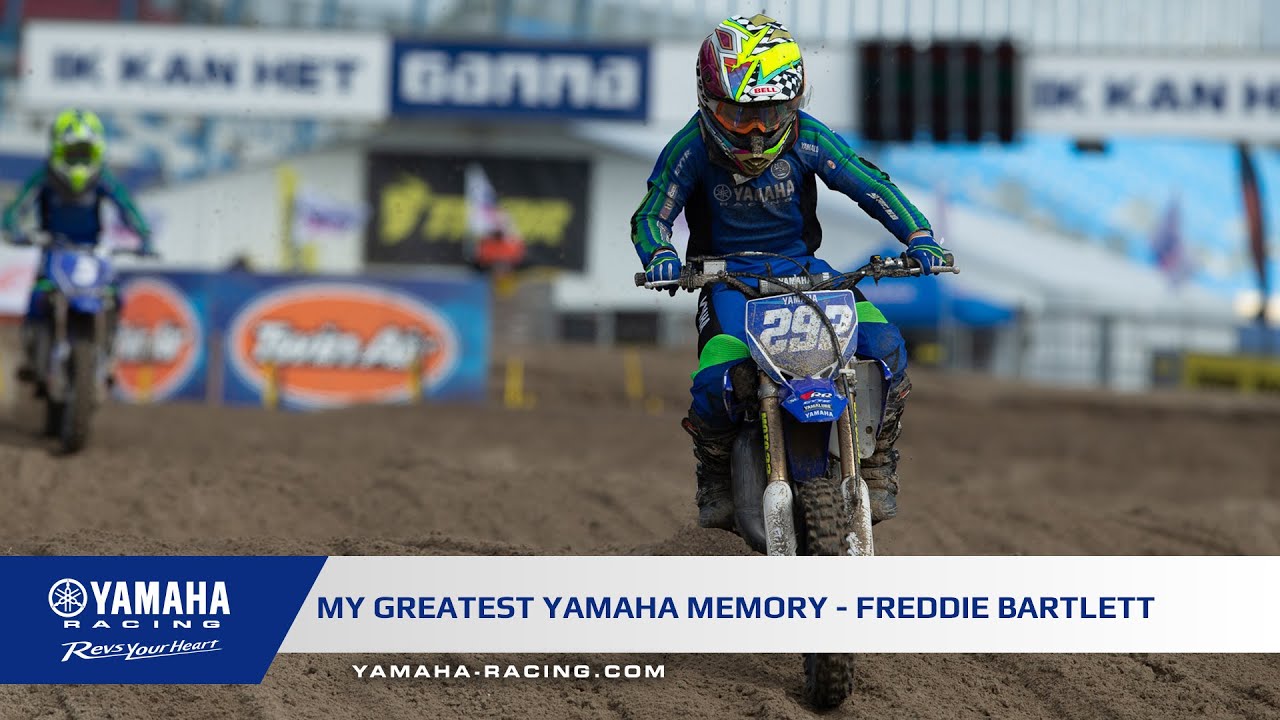 What is the YZ bLU cRU FIM Europe Cup?

The YZ bLU cRU FIM Europe Cup It is a program for young ambitious off-road riders that already race YZ125, YZ85 or YZ65 motocross bikes inside one of 17 approve National Championships, that provides an entry into Yamaha Motor Europe’s racing pyramid.

After three successful editions of the YZ125 bLU cRU FIM Europe Cup and following the launch of the YZ65 and updated YZ85, Yamaha Motor Europe decided to expand the bLU cRU Cup program at the end of the 2018 season. From 2019 onwards the bLU cRU Cup has been made up of three classes, YZ65, YZ85 and YZ125.

Riders that race YZ65, YZ85 or YZ125 motorcycles inside their National 65cc, 85cc or 125cc Championships can apply pre-season to be part of the program. Once accepted, they will be provided with a bLU cRU package that has a number of benefits, including Yamaha Racing Paddock Blue clothing, a bLU cRU sticker set for their YZ65, YZ85, YZ125 motorcycles, national bLU cRU mastercamps, VIP visits to local MXGP rounds and more.

The top-performing riders (up to a maximum of 40) in their National Championships will reach the bLU cRU FIM Europe Cup Superfinale, a truly international race held at one of the world’s biggest motocross events. The top three finishers at the SuperFinale and two wildcard riders will move on to take part in a unique Yamaha Masterclass under the guidance, supervision and advise of the bLU cRU Ambassadors. From this, one lucky 65cc rider and one lucky 85cc rider is picked to move up and join a Supported Yamaha team where he or she will race the next following EMX season, while the 125cc winner will join Yamaha Motor Europe’s Official EMX125 team.

The first editions of the YZ65 and YZ85 bLU cRU Cup’s took place in 2019, where the program released three new stars into the professional world of motocross racing, Freddie Bartlett on the YZ65 and Dutch prodigy Dex Kooiker on the YZ85. In the YZ125 category, Latvian Mairus Pumpurs was the winner in 2019 and now rides for the MJC Yamaha Official EMX125 team inside the 2020 EMX125 Championship.